In the book of Esther, the name of God is not mentioned. Not even once.

Esther’s cousin Mordecai refused to bow down to the king because of his faith. This enrages the king, and he decides to order the annihilation of the Jews as a result. As queen, Esther is the Jewish people’s only hope. Her cousin Mordecai tells her, “If you remain silent at this time, relief and deliverance for the Jews will arise from another place, but you and your father’s family will perish. And who knows but that you have come to royal position for such a time as this?”

Esther prays and fasts with her friends for three days before going before the king. Her decision to act eventually saves the Jewish people.

Most of my life, when I read the story of Esther, I focused on Mordecai’s leadership and fatherly treatment of his niece. Or I thought about how amazing it was that a female orphan of no societal significance became the salvation for the entire Jewish people. Or I contemplated the value of prayer and fasting, and connected the dots between the three days of prayer and fasting and the salvation of the Jewish people.

But I never noticed what Mordecai really says. “If you remain silent, relief and deliverance WILL ARISE from another place.”

How did he know? He urged Esther to do the right thing and defend her people, but how did he know that The One Never Named in the book of Esther would find another way if Esther lacked the courage to speak up?

Maybe he didn’t have to say His Name to know Who He Is.

Somehow, the book which never names Him speaks more loudly to me than the books directly preaching at me.

When I hear Him move through the wind, there’s no doctrine or ism involved. When I see His hand move through intricate situations, tying all of it together silently, there aren’t three points and an invitation at the end. When He speaks to me–directly to me–no one else can hear Him. 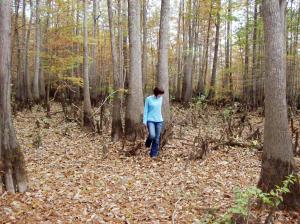 4 thoughts on “Not even once”