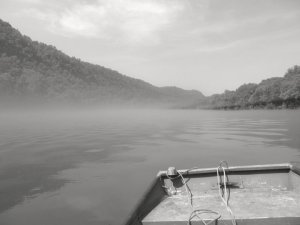 Lately, it seems like I’ve encountered multiple situations which have not presented me with an opportunity that is clearly black or white; instead, there seems to be an excess of grey matter floating around me.

In light of my pregnancy, I recently applied for government healthcare since I only work part-time and attend graduate school full-time. I felt sure I would qualify. However, I was denied Medicaid coverage because our assets exceed the limit. Basically, James owns his own truck, and it’s paid for. If we sold the truck, we would qualify. If he traded the truck in on a brand spanking new one which we could certainly not afford, we’d qualify. Does this make any sense to me? Absolutely not. Instead of rewarding American citizens for working hard to live below their means and pay debts down, the system seems to do the opposite. As a tax-paying, law-abiding citizen, I felt pretty frustrated when I was denied Medicaid.

Several people suggested that I appeal or look into loopholes. I did double-check the government’s decision, but everything I was told by other government employees and the things I learned in doing the research suggested that the decision was, in fact, in line with Medicaid policies.

At that point, many people I know suggested that we find some shady means of obtaining coverage. After all, wasn’t it my right to get my pregnancy paid for since I’d worked so hard and contributed so much over the years? While I saw the rationale behind this argument, the decision I was faced with was an easy one. I would accept the decision of the government and move on to find other financial means to pay for the pregnancy and delivery.

This was not a grey decision for me–it was black or white. It was easy. I used to be able to convince myself that it was okay to gloss things over a bit or hide little details in order to live with my marred conscience. I am just not capable of doing this anymore. And I’m grateful–the more I open my spirit to God and take actions to line myself up with Him, the more difficult it becomes to do the opposite without feeling incredibly guilty.

Other decisions aren’t so easy, though. Take my current work situation, for example. I have a job I absolutely love as a part-time advisor at a two-year college. My commute is less than 20 minutes. I work with great people, and I feel that I make a difference in the lives of the students I serve. The part-time nature provides me with lots of flexibility and the opportunity to focus on graduate school as well.

When I learned about my pregnancy, though, it was a black or white decision for me. I knew I would want to stay at home for as long as possible with my new baby.

What wasn’t so black or white was the choice to either disclose this decision to my boss now or wait until later. I weighed the pros and cons. I knew that it would be emotionally easier for me to disclose the decision because then I wouldn’t have to be vague about my future plans with my co-workers, many of whom I consider friends. At the same time, I have been in similar situations in the past, and disclosing future plans too soon to some employers is a kiss of early dismissal. I’ve never been fired, but sometimes the last two weeks of my employment at different companies was cut short to save the company money. I knew that if I decided to disclose my decision to stay home after having my baby, I’d run the risk of a similar outcome.

I decided that I would have a clearer conscience if I disclosed my decision now. So I did. I don’t regret it. I can sleep more soundly knowing that I have been an open book about what lies ahead. I just have to trust God with the outcome, and I have to believe that whatever the outcome is, God has me right in His hands, just as He always has.

I’m grateful that when I’m in the grey, I don’t have to stay there permanently. I just have to head toward the Light, and things become much less foggy.

3 thoughts on “Wading through the grey”