I’m in love with Clint Eastwood.

But since Clint Eastwood is still living, he’s the only celebrity heart-throb who I still have the opportunity to pine over in real-time. 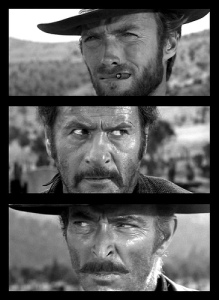 Luckily, my husband understands that my swooning is simply schoolgirlish and not sexual in any way. He even ordered a collection of Clint Eastwood’s greatest hits for me recently. I’ve never seen most of them. We’ve started working our way through watching them, the first being “The Good, The Bad, and The Ugly,” a 1966 Italian western film featuring none other than–you guessed it–Clint Eastwood. Eastwood plays Blondie, a mysterious lone gunman whose life story intertwines with two other shady characters, Tuco (the ugly) and Angel Eyes (the bad).

The movie was fantastic. Afterward, my husband and I discussed it and shared our opinions about the characters, plot, special effects, and other aspects of the film. I noted that my least favorite character was Angel Eyes.

“He was mean through and through. He was really the only flat character, I think,” I said.

This led to a discussion of flat versus round characters in film and fiction.

And it led me to ponder flat versus round characters in real life this morning as I lay in bed. It seems that almost every person I’ve encountered in life–I’d venture to say every person–is a round character, even if at first, they seem flat and completely static. (For the record, for those unfamiliar with these terms, flat characters are defined as characters who do not undergo significant change or growth in the course of a story, or characters who remain the same and are totally predictable.) As I lay in bed this morning hoping my brain would disengage and allow me to rest, I toyed with trying to identify flat characters in my own life.

Take my former boss, for example. On the surface, she honestly seemed kind of evil to me. Her business and personal ethics were varying shades of gray, at best. She showed little compassion for her employees. If she saw no benefit to her own ladder-climbing aspirations, she was simply not interested.

However, on deeper reflection, I remembered that she also spent several days mourning the loss of a family member and became acutely human while grieving. I recalled an instance when she went above and beyond to assist a student who, frankly, did not have much hope for success with or without assistance, simply because she said she felt like no one else had given him a chance. And I thought about the insecurity–disguised as cockiness–that radiated from her each time I observed her speaking to groups of people, and the stinging empathy I felt for her during those moments.

On to the next potential flat character, then.

But as I perused my memories of potential people who’d always been one way or another, I found that I could not identify one single person in my past who was truly static, flat, or all-or-nothing in their actions. How about the boring guy I went to college with who seemed like an elderly man at age 20? Nope–even he had a vanity license plate just for fun. Or how about a friend of mine, the stereotypical party girl, who never seemed down or unhappy? Nope–I once passed her tissues while she wept over a failed relationship. What about the man who raped me when I was 16 years old? Not even him. A friend of the family, I’ve witnessed his generosity toward his loved ones and know about his own troubled past, which has affected who he has become.

As I reluctantly rolled out of bed, succumbing to insomnia once again, I concluded that there’s a little bit of Blondie, Tuco, and yes, even Angel Eyes, in all of us.

Redemption is always possible, as long as there’s breath left in us.

4 thoughts on “The good, the bad, and the ugly”